On July 15th, Dr. Fatih Birol, Chief Economist at the IEA, will be coming to present to the BIEE. He will provide reflections from the IEA’s flagship publication World Energy Outlook (WEO) on how a new global energy landscape is emerging, resetting long-held expectations for our energy future. Furthermore, he will present from the recent WEO special report, four short-term measures that could keep the global 2°C climate change target within reach. 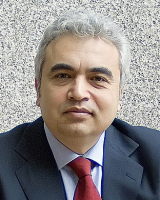 Dr. Fatih Birol is the Chief Economist at the International Energy Agency in Paris. He is responsible for the IEA’s flagship World Energy Outlook publication, which is recognized as the most authoritative source of strategic analysis of global energy markets. He is also the founder and chair of the IEA Energy Business Council, which provides a forum to enhance cooperation between the energy industry and energy policymakers.

Dr. Birol has been named by Forbes Magazine among the most powerful people in terms of influence on the world’s energy scene. He is the Chairman of the World Economic Forum’s (Davos) Energy Advisory Board and has served as a member of the UN Secretary-General’s ‘High-level Group on Sustainable Energy for All’. In 2013, Dr. Birol was presented with two special awards from the Iraqi Deputy Prime Minister and the Minister of Foreign Affairs in appreciation of the work he and his team carried out for the Iraq Energy Outlook. In 2012, he was awarded the Order of Merit of the Italian Republic, the country’s highest honour. In 2009, alongside awards from the Dutch and Polish governments, Dr. Birol received Germany’s Federal Cross of Merit, the country’s most prestigious decoration. He was awarded the Golden Honour Medal of Austria in 2007 and was made a Chevalier dans l’ordre des Palmes Academiques by France in 2006. These followed awards from the governments of Turkey in 2005, the United States in 2004 and from the Russian Academy of Sciences in 2002. He is a past winner of the International Association of Energy Economics’ annual award for outstanding contribution to the profession.

Prior to joining the IEA in 1995, Dr. Birol worked at the Organisation of the Petroleum Exporting Countries (OPEC) in Vienna. A Turkish citizen, Dr. Birol was born in Ankara in 1958. He earned a BSc degree in power engineering from the Technical University of Istanbul. He received his MSc and PhD in energy economics from the Technical University of Vienna.