Keynote Topic:  Shell’s Sky scenario: a scenario to meet the goals of the Paris Agreement

The Paris Agreement has sent a signal around the world: climate change is a serious issue that governments are determined to address.  Shell has published its latest energy-system scenario, called Sky, which illustrates a technically possible, but challenging pathway for society to achieve the goals of the Paris Agreement.

Sky builds on earlier work and is Shell’s most optimistic scenario in terms of climate outcomes.  The Sky scenario outlines what Shell believes to be a technologically, industrially, and economically possible route forward, consistent with limiting the global average temperature rise to well below 2C from pre-industrial levels. It reveals the potential for an energy system to emerge that brings modern energy to all in the world, without delivering a climate legacy that society cannot readily adapt to.  It relies on a complex combination of mutually reinforcing actions by society, markets and governments.  It recognises that the necessary changes will unfold at different paces in different places, and ultimately transform all sectors of economic activity.  The changes are economy-wide, sector-specific, and amount to re-wiring the global economy over the next 50 years. 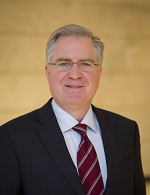 Steven Fries is the Chief Economist for Royal Dutch Shell, a role he previously held from 2006 to 2011, and a Visiting Professor at Smith School of Enterprise and the Environment at the University of Oxford. Prior to re-joining the company in 2016, he was a Director of Analysis and Chief Economist for the UK Department of Energy and Climate Change. He also has held a series of senior positions at the European Bank for Reconstruction and Development, including Deputy Chief Economist and Director of Research. He began his professional career as an economist at the International Monetary Fund. He holds D Phil in economics from the University of Oxford and an undergraduate degree in economics and finance from the University of Pennsylvania’s Wharton School.

Global Warming of 1.5°C is an IPCC special report on the impacts of global warming of 1.5 °C above pre-industrial levels and related global greenhouse gas emission pathways, in the context of strengthening the global response to the threat of climate change, sustainable development, and efforts to eradicate poverty.  The report is due to be published in October 2018.

Professor Jim Skea will speak about the findings of this report and discuss the outcomes in relation to the Sky Scenarios.