Two former energy ministers, Lord Howell and Prof Charles Hendry addressed  the global and local challenges for energy policy going forward.  In his speech Lord Howell  discussed   global policy requirements while Prof. Hendry looked at the UK policy context. They  explored some of the common themes across the world (such as energy security, climate change and affordability) and the specific UK circumstances (such as indigenous oil & gas resources, nuclear, renewables, EMR and the possibility of Scottish independence).

The Rt.Hon Lord Howell was formerly Secretary of State for Energy and  for Transport in Margaret Thatcher’s Cabinet, and before that Minister of State in Northern Ireland and Minister for the Civil Service. He served recently as Minister of State with responsibility for International Energy Security and the Commonwealth in the Coalition Government. He was Chairman of the House of Commons Foreign Affairs Committee from 1987-1997. He is currently Chairman of the House of Lords Select Committee on Soft power and Britain’s Overseas Influence. His latest book ‘Old Links and New Ties: Power and Persuasion in an Age of Networks’, will be published in early November. 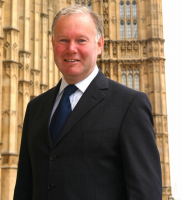 Charles Hendry has been Conservative Member of Parliament for Wealden since 2001 and was Minister of State for Energy from May 2010 until September 2012.  He was previously the Conservative Party’s spokesman on energy issues, holding the portfolio longer than any previous Minister.

Since leaving Ministerial office, he has been appointed as a Visiting Professor at the University of Edinburgh (in both the Business School and the Academy of Government).   He is advising the Energy Secretary, Ed Davey MP, on ways to drive up UK content in the oil and gas industry and he is President of the fuel poverty charity, National Energy Action.

The Prime Minister has appointed him as his Trade Envoy to Azerbaijan, Kazakhstan and Turkmenistan.  He is Chairman of the Advisory Board of the Russo-British Chamber of Commerce.

Charles is Chairman of the world’s largest offshore wind farm development, the 9 gigawatt Forewind proposal for Dogger Bank, and is advising investors on a transmission cable to bring geothermal electricity from Iceland to the UK.