Turning the light on energy consumption

Smart meters are being progressively introduced into households across Europe in order to allow households to see how much they consume on a day-to-day basis, and to incentivise them to reduce their consumption via various means.

The majority of electricity tariffs do not reflect the actual cost of producing electricity. Often, consumers pay a flat rate for the consumption no matter the time of consumption. Yet, electricity consumed during the day does not have the same production costs as those consumed during the night. The former cost significantly more to produce and distribute (Faruqui, 2010). This flat-rate pricing gives electricity an unlimited quality from consumers’ point of view; no matter how much they consume, no matter when they consume it, the price per kWh remains the same. In addition, electricity consumption is generally a relatively small part of a household’s bills which increases the unlimited dimension of electricity.

Dynamic pricing has long been proposed as a way to control energy use by providing consumers with tariffs which better reflect the true costs of energy production thus incentivising consumers to take part in demand response, i.e. encouraging consumers to respond to higher prices by lowering their demand for electricity, and to shift their consumption to times when electricity production is cheaper.

The installation of smart meters means that new ways of incentivising consumers to reduce their consumption and to achieve a more flexible demand for energy can be introduced, whether that be via dynamic pricing or other methods. In my research, I look at consumers’ role within the energy system by analysing the results of previous field experiments and pilot studies which test consumers’ response to different incentives, and by testing on a micro level the responses of individuals to specific incentives in laboratory experiments.

Turning now to a comparison of behaviour in response to a nudge or a peak pricing tariff. I explore, in a stylised energy consumption game, whether individuals consume less when nudge to do so or when the price of consumption is increased. I nudge individuals to reduce their consumption by showing them a happy face if they are consuming below or at the optimal level, and a sad face if above. I find that the nudge is understood and integrated into individuals’ decision making quicker than an equivalent price. When examining solely the behaviour of individuals in response to a nudge, I find that although consumption is reduced on average, at the individual level, those who tend to under-consume initially continue do so, and those who overconsume continue to overconsume. 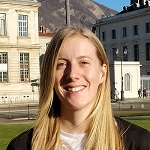 Penelope Buckley is currently completing her PhD at the Université Grenoble Alpes with Grenoble Applied Economics Laboratory. Her thesis is on “Dynamic pricing and smart meters: An experimental analysis of household electricity consuming behaviour”. Using  methods from experimental and behavioural economics to explore how individuals and households respond to different incentives aimed at encouraging them to reduce their energy consumption. She has a joint Master’s degree in Economics, Statistics and Management from the Université Grenoble Alpes and Grenoble School of Management, and completed her undergraduate studies at the University of Kent.